Fake it till you make it
Okay, so fake tan on guys may leave you picturing this. But if you want a glow resembling that of two weeks in the Caribbean, there’s only

one way to do it and that’s to fake it! A tan may look healthy and leave you feeling smug with those post-holiday comments of ‘looking good mate; how was the holiday?’ In actual fact a tan is a sign of the skin producing a dark pigment called melanin which can lead to skin cancer; so not a healthy look at all! Working in construction and spending an increased amount of time outside, raises the risk of being exposed to those UV (ultraviolet) rays which can lead to skin cancer. HSE research deems construction workers as a significant ‘at risk’ group and with skin cancer cases doubling in the last 20 years and 800 construction workers diagnosed with it per year, it’s time to dive into your other half’s beauty stash and pinch a bit of that bronzed goddess tanning spray! We’ll be going less for the David Dickinson/Peter Andre look and more for the Matthew McConaughey vibes (can I spray on the muscles too!)

What are the harmful effects?

In the short term even mild reddening of the skin is a sign of damage. Sunburn can happen in as little as ten minutes causing blisters and peeling of the skin. Longer term, the sun causes ageing of the skin and it can become leathery, mottled and wrinkled. Wouldn’t we all rather be sporting the skin of Dame Joan Collins who turns 86 this month and has always been a pro sun protection rather than sharing similarities with this lorry driver. This photo really does show the ageing consequences of the sun, even through glass, as with this driver. The side of the face that has been exposed to UV radiation for hours a day on the road, has clearly aged quite significantly more than the other side. Of these short and long term effects, the most serious result could be developing skin cancer.

What is skin cancer?
Skin cancer is one of the most common cancers and can fall into one of two groups. Non-Melanoma skin cancer (NMSC) is caused by UV rays from natural sunlight effecting areas of exposed skin such as the head and neck. It is important to remember that UV rays will still cause damage on cloudy days. Signs of NMSC can be a lump or patch on the on the skin that doesn’t heal after a few weeks. The lumps can be red and firm and the patches are flat and scaly. Lesions may be crusty, form an ulcer, bleed and be painful. Most NMSC can be

treated, often with a simple operation.
Malignant melanoma is the second type of skin cancer which is rarer but can be a lot more serious and spread to other organs, sometimes proving fatal. This cancer occurs in the skin cells where the skin pigmentation melanin is found. It is important to keep an eye on moles on the skin observing new moles, changes to existing moles, noting those with irregular shapes or more than one colour and be aware if they are itchy or bleeding. If the melanoma is caught early, surgery can be successful.

Who is most at risk?
Be particularly aware of protecting your skin if you have:
-fair or freckled skin that doesn’t tan, or goes red or burns before it tans;
-red or fair hair and light-coloured eyes; 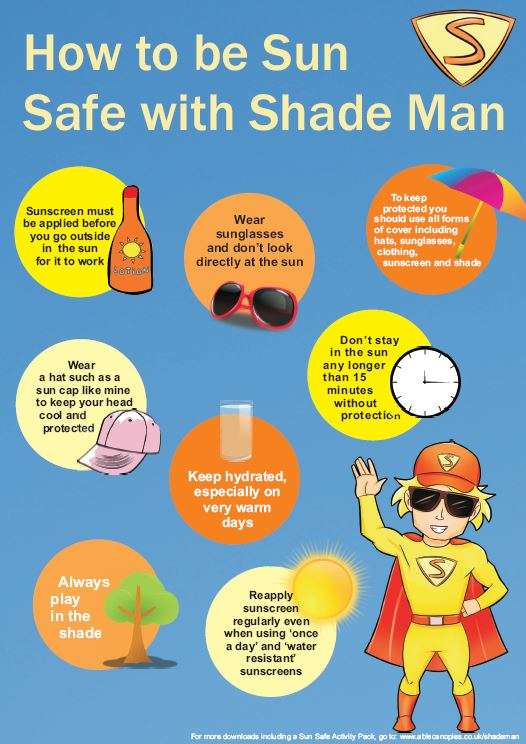 -a large number of moles.

People of all skin colours should take care to avoid damage to the eyes, overheating and dehydration. If you are spending a large amount of time outside for your job or otherwise be aware of protecting your skin.

What can you do to protect yourself?

-Keep your top on and cover up in hot weather with loose clothing
-Wear a hat with a brim or a flap that covers the ears and the back of the neck.
-Stay in the shade whenever possible, during your breaks and especially at lunch time.
-Use a high factor sunscreen of at least SPF15 on any exposed skin.
-Drink plenty of water to avoid dehydration.
-Check your skin regularly for any unusual moles or spots. See a doctor promptly if you find anything that is changing in shape, size or colour, itching or bleeding.

To sum things up, no tan is healthy unless it’s fake so your best bet is to raid your other half’s bathroom cupboards and grab a bronze glow from a bottle.